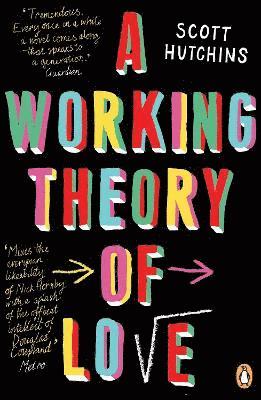 A Working Theory of Love

A Working Theory of Love by Scott Hutchins is a recklessly witty, outrageously honest novel about sex, love and artificial intelligence. 'Tremendous, big, clever. Every once in a while a novel comes along and speaks to a generation ... has much to say about what it means to live, love and lose in the twenty-first century' Guardian Silicon Valley: home of online start-ups, couture coffee, sexual meditation, and the future. In its midst, Neill Bassett is helping to build the world's first artificial intelligence - a computer that talks, thinks, lies, and if all goes to plan, feels bad about it too. But when the experiment swerves in an unexpected direction, Neill is forced to confront a few buried feelings of his own - for his ex-wife, for his dead father, for his twenty-first-century life, and for a very twenty-first-century woman called Rachel, who might just hold the answer to it all... 'Electrifying. Clever, funny and very entertaining' The New York Times 'Worthy of Chuck Palahniuk ... Hutchins's satirical take on 21st-century existence is sharply observed' Independent 'Touching and extremely funny, Neill Bassett is a disenchanted bachelor for the Noughties generation. Brilliantly achieved' GQ 'Inventive, intelligent, hilarious. One of the pleasures here is Hutchins' terrific grasp of the zeitgest' San Francisco Chronicle 'Terrific. Throughout, Hutchins hits that sweet spot where humour and melancholy comfortably coexist' Entertainment Weekly 'Mixes the everyman likeability of Nick Hornby with a splash of the offbeat intellect of Douglas Coupland' Metro Scott Hutchins teaches at Stanford University, California. His work has appeared in StoryQuarterly, The Rumpus, The New York Times and Esquire. This is his first novel.
Läsglädje för alla, varje dag