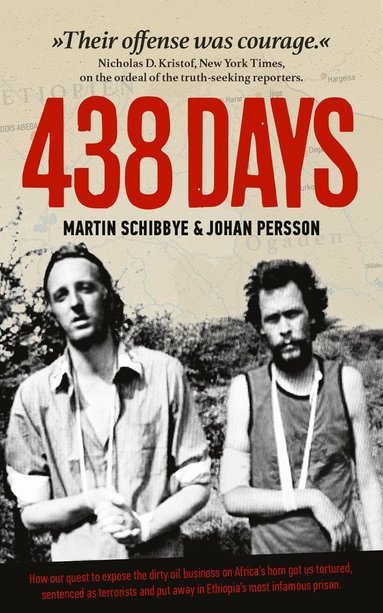 438 days : how our quest to expose the dirty oil business in the Horn of Africa got us tortured, sentenced as terrorists and put away in Ethiopia's most infamous prison

When the war on terror became a war on journalists. This book would not exist if things had not gone off the rails. On the night of 28 June 2011, we risked everything when, under cover of darkness, we slipped across the border between Somalia and Ethiopia. We wanted to investigate how relentless oil prospecting was affecting people in the closed-off and conflict-ridden region of Ogaden. Our goal was to go beyond the alarmist reports, or the descriptions provided by refugees to get at the truth using our own eyes and ears. Five days later we lay shot and bleeding in the desert sand. But in that very moment when the original assignment died, another story began. A story of legal tampering, propaganda, and geopolitical manoeuvring. After a Kafkaesque trial we were sentenced to eleven years in prison for terrorist offences. We were far from alone. Streams of journalists and ­politicians, as if on a conveyor belt, were being imprisoned for refusing to be at the beck and call of the dictatorship. Our investigation into oil had turned into a story about ink. Everyday life turned into a battle for survival in the notorious Kality Prison. On a cement floor under a corrugated iron roof in a world of deadly diseases, beatings and oppression we carved an existence based on rigid adherence to routine. Despite our shoe-laces and our freedom of speech being taken from us, we struggled to hold on to the most valuable thing in the world. The freedom to determine ones own identity. /Martin Schibbye & Johan Persson "438 Days" is one of the best-selling non-fiction books ever in Sweden, and is about to be turned into a motion picture. It has been unanimously hailed by critics as a real page-turner, utterly outstanding and extremely well-written, captivating and fascinating. Its authors have received numerous prizes, among them the Anna Politkovskaya Memorial Award and Reporters Without Borders Press Freedom Prize.
Läsglädje för alla, varje dag