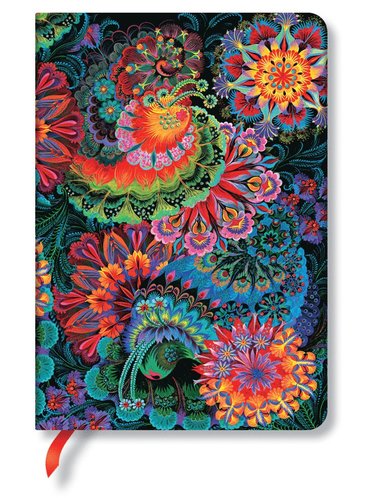 249:-
Moonlight, Midi Linjert - Infinite wonders can be produced by tiny brush strokes! Allow your gaze to linger among the kaleidoscopic amazements found in our Olena’s Garden covers. Olena Skytsiuk is one of the foremost practitioners of Ukrainian Petrykivka painting, a technique in which each artwork is made with special brushes crafted from cat hairs to create a visual effect unlike any other. The style was born in the village of Petrykivka in the 17th century and is now recognised by UNESCO as part of the Intangible Cultural Heritage of Humanity. In each design, untold thousands of small brush strokes combine to create magnificently hued miniature landscapes and floral scenes. Originally, these types of paintings were used to decorate household objects and surfaces and were often displayed against a white background, though today’s Petrykivka artists work on black, green, blue or red backgrounds. This ornamental folk art technique is practiced by only a few artists today, and painters like Olena Skytsiuk play an important role in maintaining this rich cultural tradition. 180x130mm
Att läsa är att resa