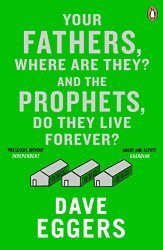 Your Fathers, Where Are They? And the Prophets, Do They Live Forever?

Your Fathers, Where Are They is Dave Eggers' brilliantly executed story of one man struggling to make sense of the world. In a barracks on an abandoned military base, miles from the nearest road, Thomas watches as the man he has brought wakes up. Kev, a NASA astronaut, doesn't recognize his captor, though Thomas remembers him. Kev cries for help. He pulls at the chain. But the ocean is close by, and nobody can hear him over the waves and wind. Thomas apologizes. He didn't want to have to resort to this. But they really needed to have a conversation, and Kev didn't answer his messages. And now, if Kev can just stop yelling, Thomas has a few questions. "With each tightly controlled book, Eggers' fiction becomes more prescient, moving and unsettling ...Even if all generations are lost generations, we need engaged, incendiary novels which ask: What now?" (Independent). "An angry and astute investigation into the state of America ...Politically and polemically engaged in the tradition of Dickens and Zola". (Mark Lawson, Guardian). "One of our fiercest and most compelling writers". (Sunday Times). Dave Eggers is the author of nine books, including most recently The Circle and A Hologram for the King, which was a finalist for the 2012 National Book Award. He is the founder of McSweeney's, an independent publishing company based in San Francisco that produces books, a quarterly journal of new writing (McSweeney's Quarterly Concern), and a monthly magazine, The Believer. He lives in Northern California with his family.
Läsglädje för alla, varje dag