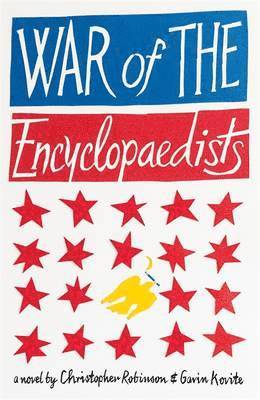 War of the Encyclopaedists

War of the Encyclopaedists is Christopher Robinson and Gavin Kovite's dazzling literary debut. On a summer night in an arty enclave of Seattle, friends Mickey Montauk and Halifax Corderoy throw one last blowout party before their lives part ways. They had planned to move together to Boston, but global events have intervened: Montauk has just learnt that his National Guard unit will deploy to Baghdad at the end of the summer. And Corderoy is faced with a moral dilemma: his girlfriend Mani has just been evicted and he must decide whether or not to abandon her when she needs him most. The year that follows will transform them all. "This book has sweep and heart and humour. It captures coming of age during foreign wars and domestic malaise, and it does so with electrifying insight." (Mary Karr, author of The Liars' Club). "As bizarre, hilarious and devastating as the past decade...Simultaneously a coming-of-age story, a war story, and a story of the disaffected millennial generation for whom the war hardly happened at all." (Phil Klay, author of Redeployment Chris Robinson, a Boston University and Hunter College). MFA graduate, is a MacDowell Colony fellow and a Yale Younger Poets Prize finalist. His writing has appeared in many publications, including the Kenyon Review and McSweeney's. Gavin Kovite was an infantry platoon leader in Baghdad from 2004-2005. He attended NYU Law and is now an Army prosecutor. His writing has appeared in literary magazines and in Fire and Forget, an anthology of war fiction.
Att läsa är att resa