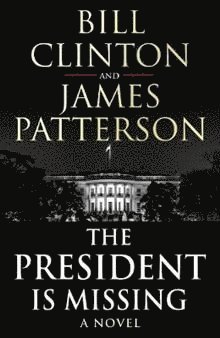 The President is Missing

The President is Missing. The world is in shock. But the reason he's missing is much worse than anyone can imagine.

With details only a President could know, and the kind of suspense only James Patterson can deliver.

`Yes, The President is Missing is fiction - it's a thriller - but James Patterson and I have come up with three of the most frightening days in the history of the presidency. And it could really happen... These days, the seemingly impossible can happen. And it happens so fast. I believe that readers will not soon forget President Jonathan Duncan and his story.' - Bill Clinton.

`Needless to say, we had some great conversations about the presidency, what life in Washington is really like, and about the state of America and the rest of the world.' - James Patterson.

'Relentless in its plotting and honest in its examination of issues that strike close to our hearts.' - Jeffery Deaver.

'From the pens of two American icons comes a political thriller that rocks... a helluva story.' - Nelson DeMille, author of The Cuban Affair.