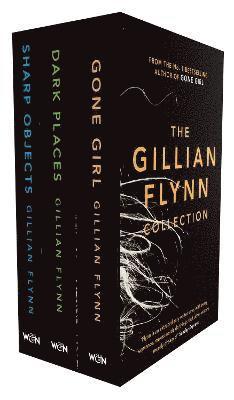 GONE GIRL - THE ADDICTIVE No.1 US BESTSELLER THAT EVERYONE IS TALKING ABOUT Who are you? What have we done to each other? These are the questions Nick Dunne finds himself asking on the morning of his fifth wedding anniversary when his wife Amy suddenly disappears. The police suspect Nick. Amy's friends reveal that she was afraid of him, that she kept secrets from him. He swears it isn't true. A police examination of his computer shows strange searches. He says they weren't made by him. And then there are the persistent calls on his mobile phone. So what really did happen to Nick's beautiful wife? SHARP OBJECTS - When two girls are abducted and killed in Missouri, journalist Camille Preaker is sent back to her home town to report on the crimes. Long-haunted by a childhood tragedy and estranged from her mother for years, Camille suddenly finds herself installed once again in her family's mansion, reacquainting herself with her distant mother and the half-sister she barely knows. As Camille works to uncover the truth about these violent crimes, she finds herself identifying with the young victims - a bit too strongly. Clues keep leading to dead ends, forcing Camille to unravel the psychological puzzle of her own past to get at the story. Dogged by her own demons, Camille will have to confront what happened to her years before if she wants to survive this homecoming DARK PLACES - Libby Day was just seven years old when her older brother massacred her family while she hid in a cupboard. Her evidence helped put him away. Ever since then she has been drifting, surviving for over 20 years on the proceeds of the 'Libby Day fund'. But now the money is running out and Libby is desperate. When she is offered $500 to do a guest appearance, she feels she has to accept. But this is no ordinary gathering. The Kill Club is a group of true-crime obsessives who share information on notorious murders, and they think her brother Ben is innocent. Was Ben capable of murder? Libby must delve into her family's past to uncover the truth - no matter how painful...
Läsglädje för alla, varje dag