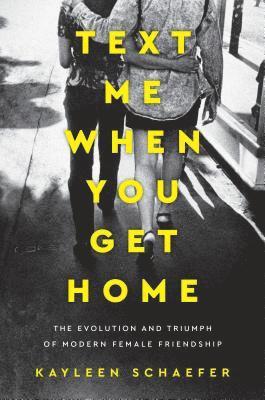 Text Me When You Get Home

" Text Me has the thrills and laughs of a romantic comedy, but with an inverted message: 'There just isn't only one love story in our lives,' Schaefer writes. If you're lucky, friends will be the protagonists in these multiple love stories. It's high time that we start seeing it that way."--NPR

"Text me when you get home." After joyful nights out together, female friends say this to one another as a way of cementing their love. It's about safety; but more than that, it's about solidarity.

From Broad City to Big Little Lies to what women say about their own best friends, the stories we're telling about female friendship have changed. What used to be written off as infighting between mean girls or disposable relationships that would be tossed as soon as a guy came along are no longer described like that. Now, we're lifting up our female friendships to the same level as our other important relationships, saying they matter just as much as the bonds we have with our romantic partners, children, parents, or siblings.

Journalist Kayleen Schaefer relays her journey of modern female friendship: from being a competitive teenager to trying to be one of the guys in the workplace to ultimately awakening to the power of female friendship and the soulmates, girl squads, and chosen families that come with it.

Schaefer has put together a completely new sociological perspective on the way we see our friends today, one that includes interviews with dozens of other women across the country: historians, creators of the most iconic films and television shows about female friendship (and Galentine's Day!), celebrities, authors, and other experts. The end result is a validation of female friendship that's never existed before.
Läsglädje för alla, varje dag