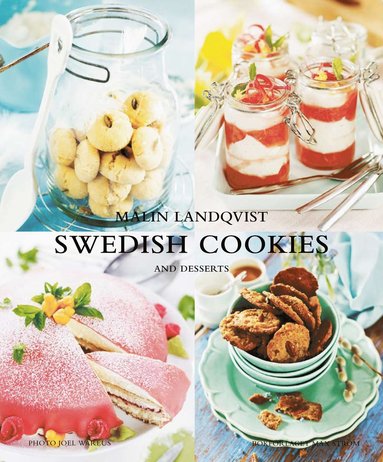 »This book in one that I'd take with me if I was going to emigrate. It is a book for cookie monsters and if you're not one already, then you will want to be one«FINE DINING Writer Malin Landqvist and photographer Joel Wåreus have produced an irresistible book on Swedish dessert traditions. You’ll find classics from the four seasons, including semlor, a delectable springtime treat of whipped cream and almond paste on a light wheat roll, Easter cake, a deliciously summery strawberry cake and several other berry-based desserts, baked cinnamon apples for the autumn and, for Christmastime, ginger snaps and saffron buns. It’s a cookbook full of simple recipes, but we also learn to whip up more advanced pastries like Danish weinerbröd, chocolate biskvier made with almonds and butter cream, and princess cake.As in her earlier cookbooks, Landqvist adds some modern flavours while providing tips on new interpretations of classic recipes. And she aims to enrich the Swedish food experience with imported favourites like brownies and cheesecake. Swedish Cookies and Desserts is an ideal gift for our foreign friends — because no one can resist apple crumb pie with lingonberry dots or the traditional seven kinds of cookies!For many years, Malin Landqvist has devoted herself to the renewal of classic Swedish cuisine, including the bestselling series En god sommar, En god jul and En god höst, and most recently a major book project in cooperation with the Expressen newspaper and Sweden’s leading food and drink magazine, Allt om mat, where she is a member of the editorial staff and has composed numerous recipes. Joel Wåreus is one of Sweden’s most established food photographers, with several books and many published articles to his credit.