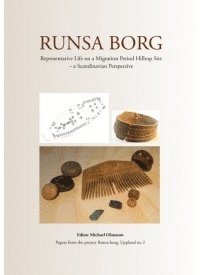 Runsa is the largest and, in many respects, most complex of hilltop sites in Sweden from the Migration Period. The similarities between Runsa and other hilltop sites on the Continent are evident. Multifunctional elite sites like Runsa were characterized by specialization; defence was combined with crafts, trade and representation. In the case of Runsa, aspects of cultic activities must also be taken into consideration. The ability to raise such fortifications became the mark of the elite in several regions of the country, signifying the transformation of internal traditions and symbolic and economic imports – a result of contacts with other Germanic speaking peoples and the Roman Empire The new structure of hilltop sites can be regarded as the development of an asymmetrical political landscape, dominated by a centre. This book’s point of departure is the Great Hall at Runsa, but the hall phenomenon at Zealand, Denmark is is also discussed from a Scandinavian point of view. Religious, judicial and ideological aspects of the hall interiors, with specific reference to the high-seat, are explored as well. Lordship, symbols and memory and the concept of a“hall” are discussed from a philological point of view. Trace elements and chemistry have been important methods applied to the analysis of the function and use of the Runsa “hall” and technical, ideological and aesthetic points behind the actual construction of the Great House at Runsa are also discussed. The second section of this book deals with how to cope with the differences of the archaeological and quaternary geological results and interpretations. The unique discovery of the Runsa harbour and its finds is addressed and re-interpretations of an old excavation of Herrgardsklint on Gotland show that we are dealing with the first known hilltop site on the island. Finally, Danish archaeologists present a most interesting and important project concerning the many fortifications and enclosures on the island of Bornholm.
Läsglädje för alla, varje dag