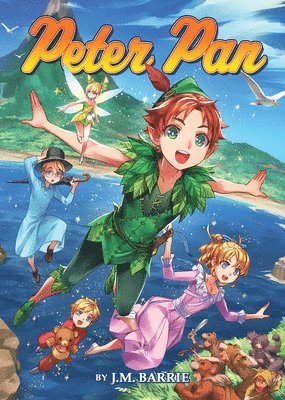 Seven Seas is excited to present Peter Pan, an all-new illustrated edition of the beloved story of the boy who never grows up, accompanied by manga-style artwork that will appeal to readers of any age who still believe in magic. Peter Pan is a literary classic, and has been adapted into numerous plays, movies, cartoons, and novels. This new edition reintroduces readers to J. M. Barrie's original novel, Peter Pan, in its entirety, accompanied by delightful black-and-white manga-style illustrations by Kriss Sisson, illustrator of Seven Seas' popular Alice and Oz illustrated books. Look for the second star to the right and it's straight on 'til morning as you follow young Wendy, John, and Michael Darling as they're whisked away from their London home to the magical world of Neverland. Their guide, the brash ruler of Neverland, is none other than Peter Pan - the boy who never grows up. With a little fairy dust and a lot of happy thoughts, the Darling children soar through the skies of Neverland as Peter befriends mermaids, plays alongside the Lost Boys, and confronts the pirates led by the vengeful Captain Hook!
Läsglädje för alla, varje dag