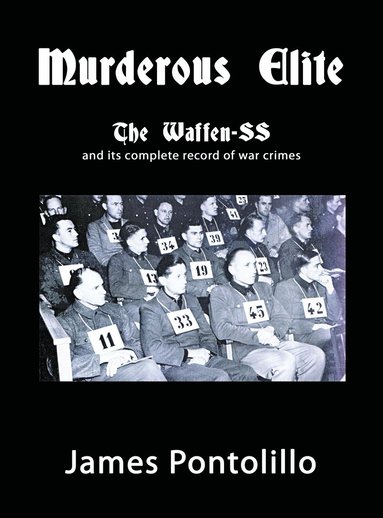 Murderous Elite : The Waffen-SS and its record of atrocities

A visit to any well-stocked bookstore should quickly convince the average reader that there is certainly no shortage of books about the Second World War, particularly National Socialism and the Third Reich. returncharacterreturncharacterMore than five decades have passed since the war's end and its massive historiography continues to grow and evolve with seemingly no end in sight. It is probably foolish to think that the examination of and reflection on the 20th century's seminal event will ever reach completion. returncharacterreturncharacterFor example, there is a curious lack of published information concerning the numerous wartime atrocities (i.e., violations of international law such as killing noncombatant civilians, surrendering opponents, and prisoners of war) committed by Nazi Germany's military elite, the Waffen-SS. In fact, there are very few books currently in print that examine the nature and commission of war crimes perpetrated by any of the armed forces participating in the Second World War. returncharacterreturncharacterThus, it appears that the nearly forty divisions of the Waffen-SS have not been accorded any special treatment by military historians, but rather have benefited from an insidious and apparently universal form of ethical tunnel-vision. Examining an enemy's wartime behavior holds many potential dangers since our own conduct might then also be scrutinized with the goal of uncovering similar transgressions. returncharacterreturncharacterThis book is not intended to be read from cover to cover as a continuous narrative. Rather it is arranged into well-defined sections to have maximum utility as a reference work. The three main sections -- Atrocities, Unit Histories, and Individuals -- are adopted to guide readers along the most natural paths of inquiry:What happened and where? What was the unit's record of atrocities? What was the individual's involvement in atrocities? This is probably the most comprehensive reference book on the subject.
Läsglädje för alla, varje dag