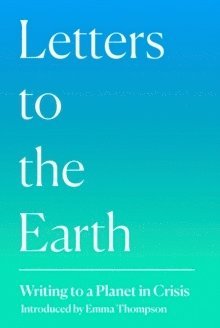 Letters to the Earth: Writing to a Planet in Crisis

The largest creative response to the climate crisis the world has yet seen. 2019 was the year of rebellion. It was the year nurses, poets, nine-year olds and grandparents came together to say: we know the truth about climate change - now it is time to act. But what words describe this crisis? What words can help our children come to terms with the future they will inherit? Earlier this year, Culture Declares Emergency invited people from all around the world to find those words by writing a letter to the earth. The invitation was open to all - to think beyond the human narrative and bear witness to the scale of the crisis. Letters of love, protest, lamentation and hope were written by over 1000 people. Now published as a collection, Letters To The Earth brings together the voices of children with authors, scientists and playwrights in the first collective creative project of its kind. Alongside letters from the public, Letters To The Earth received submissions from artist and peace activist Yoko Ono, leading feminist thinker Rebecca Solnit, award-winning poet Kate Tempest, writer and illustrator of The Lost Words Jackie Morris, novelist Anna Hope, LGBT activist Matthew Todd and environmental writers Jay Griffiths and Rob Cowen. Together they are in invitation to consider how this existential threat affects the way we live our lives and the action we take. Lots of books consider the climate crisis from a political or scientific perspective, but Letters To The Earth is the first book to chronicle how humankind is collectively processing planetary crisis. The words we need at this time come not simply from the pens of the critically acclaimed, but from the lips of children. This remarkable collection is the writing of our times.
Läsglädje för alla, varje dag