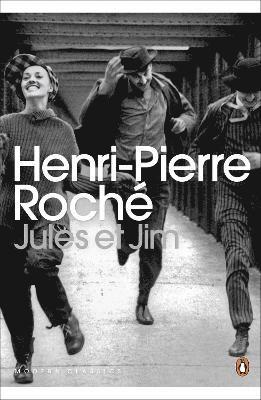 Based on a real-life love triangle and later made into Francois Truffaut's famous New Wave film, Henri-Pierre Roche's Jules et Jim is a paean to youth set in free-spirited Paris before the First World War. Jules and Jim live a carefree, bohemian existence: they write in cafes, travel when the mood takes them, and share the women they love without jealousy. Like Lucie, flawless, an abbess, and Odile, impulsive, mischievous, almost feral. But it is Kate - with a smile the two friends have determined to follow always, but capricious enough to jump in the Seine from spite - who steals their hearts most thoroughly. Henri-Pierre Roche was in his mid-seventies when he wrote this, his autobiographical debut novel. The inspiration for the legendary film directed by Francois Truffaut, it captures perfectly with excitement and great humour the tenderness of three people in love with each other and with life. This Penguin Modern Classics edition is translated by Patrick Evans with an introduction by Agnes C. Poirier and an afterword by Francois Truffaut. Henri-Pierre Roche (1879-1959) was born in Paris. After studying art at the Academie Julian, he became a journalist and art dealer, mixing with the avant-garde artistic set; his friends and acquaintances included the artists Michel Duchamp and Francis Picabia, and in 1905 he introduced Gertrude Stein to Pablo Picasso. In 1916, following his discharge from the French army, Roche went to New York and set up a Dadaist magazine, The Blind Man, with Duchamp and the artist Beatrice Wood. It wasn't until his seventies that he wrote the semi-autobiographical Jules et Jim (1953); his second novel, Les deux anglaises et le continent, was published in 1956. If you enjoyed Jules et Jim, you might like Raymond Radiguet's The Devil in the Flesh, also available in Penguin Modern Classics. 'A perfect hymn to love and perhaps to life' Francois Truffaut, director of Jules et Jim and The 400 Blows
Läsglädje för alla, varje dag