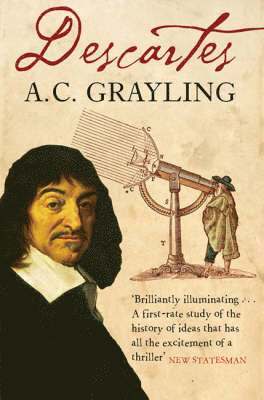 Scientist, mathematician, traveller, soldier -- and spy -- Rene Descartes has been called the 'father of modern philosophy'. Born in 1596 into an era still dominated by the medieval mindset, he was one of the chief actors in the riveting drama that ushered in the modern world. His life coincided with an extraordinarily significant time in history -- the first half of the miraculous seventeenth century, replete with genius in the arts and sciences, and wracked by civil and international conflicts across Europe. Before his death in 1650 Descartes made immense contributions to an exceptionally wide range of fields and disciplines, and his assertion 'Cogito, ergo sum' ('I think, therefore I am') has become one of the most famous maxims in all philosophy. He was the very archetype of a 'Renaissance man', and yet surprisingly little is known about him. Drawing on new research and his own insights as one of our leading philosophers, A. C. Grayling presents a stunningly accessible and fascinating portrait of the man and the remarkable era in which he lived.
Läsglädje för alla, varje dag