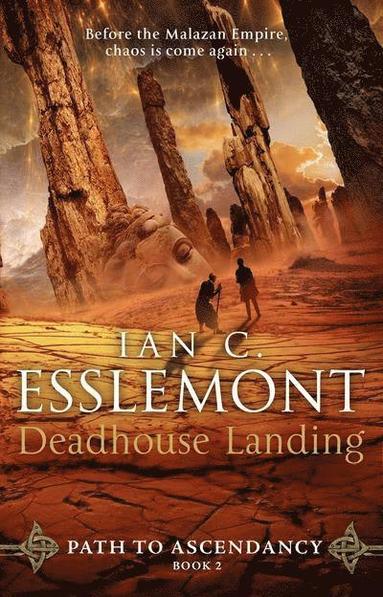 After the disappointments of Li Heng, Dancer and Kellanved wash up on a small insignificant island named Malaz. Immediately, of course, Kellanved plans to take it over. To do so they join forces with a small band of Napans who have fled a civil war on their own home island. The plan, however, soon goes awry as Kellanved develops a strange and dangerous fascination for a mysterious ancient structure found on the island. The chaos in the region extends to the metaphysical planes also as a young priest of D'rek starts to question the rot at the heart of the worship of the god of decay. And back in Li Heng, Dassem, now the proclaimed Sword of Hood, finds himself being blamed for a plague which leads him to a crisis of faith - and searching for answers. During all this, war with the neighbouring island of Nap threatens, recruited allies wonder at Kellanved's sanity, and powerful entities take more of an interest in the little mage from Dal Hon. Dancer faces a hard choice: should he give up on his partnership? Especially when the fellow's obsession with shadows and ancient artefacts brings the both of them alarmingly close to death and destruction. After all, who in his right mind would actually wish to enter an Elder mystery known to everyone as the 'Deadhouse'?
Läsglädje för alla, varje dag