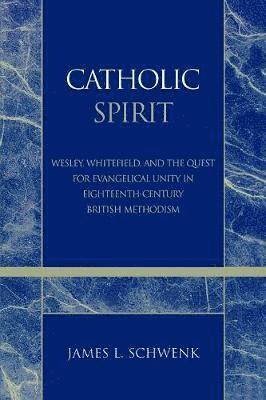 The relationship between John Wesley and George Whitefield has often been viewed as suffering from irreconcilable theological differences. In fact, for several years, the relationship between these two leaders of the revival of the Christian faith in eighteenth-century England was strained almost to the breaking point. Whitefield, a Calvinist, believed that each individual who ever lived was either destined for the glories of heaven or the horrors of hell due to an irrevocable decree of God. Wesley on the other hand argued that each person has placed before them two options: either to accept God's forgiveness or to reject it in favor of following one's own way. Most books in the past have focused on these John Wesley's and George Whitefield's differences, but what has been overlooked is the lasting friendship between these two men, which, after a brief period of separation, was restored for the sake of the continuation of the revival movement on two continents. Catholic Spirit: Wesley, Whitefield, and the Quest for Evangelical Unity in Eighteenth-Century British Methodism focuses on the key themes upon which both men agreed. It stresses the commonalties between the two leaders of British Methodism and illustrates the great lengths both went to in order to further the revival of the Christian religion in England and North America. Both Wesley and Whitefield claim to possess "Catholic spirits," that is, they both believed the importance of working with other like-minded individuals to spread the message of salvation through Christ. Author James Schwenk argues that they were successful in promoting that spirit of cooperation, even as some of their followers failed to understand how hard they worked at making "molehills out of mountains."
Läsglädje för alla, varje dag