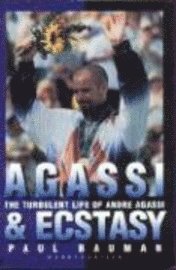 Andre Agassi is one of those rare athletes who transcend their sport. Even those who don't know a tie-breaker from a circuit breaker know who Agassi is. The same can't be said of Pete Sampras, even though Sampras has been far more successful. Maybe it is Agassi's ubiquitous television commercials. Maybe it's his marriage to Brooke Shields. Maybe it's his radical hairstyles and outlandish tennis attire. For all of Agassi's fame, though, the public doesn't really know him. Not even avid tennis fans. People see the brilliant shot-making and the listless performances, the showmanship and the tantrums, but they don't see the inner turmoil that causes his mood swings. Nor do they see his sensitivity. After years of observing Agassi on and off the court, after extensive research and interviews, veteran tennis writer Paul Bauman paints a portrait of an exceedingly complex person.
Läsglädje för alla, varje dag